Recently I’ve been struggling to wake up in the morning. Nothing much has changed, not my diet or training plan, the only factor I can think of is that the days are getting shorter. 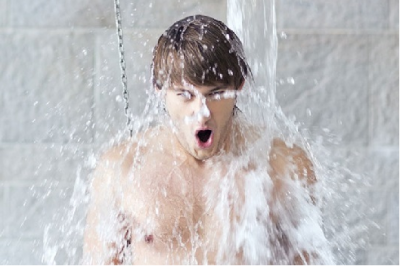 It’s hard to gleefully leap out of bed when you’re waking up in a room as dark as the inside of a cow. So what’s to be done? My usual tactic involves increasing caffeine levels to the point where I can feel my soul vibrate. But I wanted to try something new.

That’s when I hit upon cold showers.

Apparently it also improves lymphatic drainage, which is one of those things that definitely sounds like a nice idea. There’s something pleasantly DIY about it – “I’m off to grout my tiles, do my gutters and drain my lymph” – though I’m not 100% clear what it means.

Anyway. It’s meant to be good for you. But I’m more interested in the immediate effect and whether or not it wakes you up. 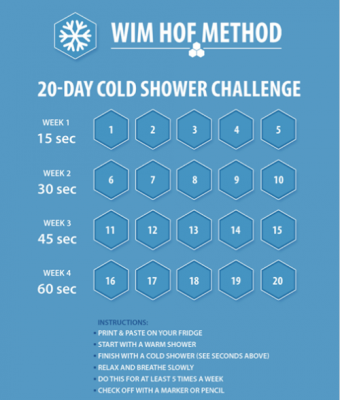 There’s something appealing in a quasi-religious sense – a little bit of suffering first thing in the morning, followed by a sense of zen relief, that resonates with the 18 years of catholic education I experienced in Ireland. At the very least it ought to wake me up.

As a lifelong, unrepentant snooze-button hitter, I knew day one is going to be tough. I typically get out of bed at the last possible minute and then shower in work after training. This new habit means I’ll have to get out of bed when the alarm actually goes off and then subject myself to something unpleasant.

Brief sidebar: when I was a kid and my parents brought my sister and me to the beach, my sister would splash about in the water for hours. Meanwhile I’d turn blue and have to be wrapped up in several towels like a traumatised survivor at the end of a disaster movie. I don’t take the cold well.

Anyway, it was nowhere near as bad as I suspected. Did I scream like a small child ? Yes I did. But I do that anyway for fun. I mostly just took short rapid breaths and after a few seconds it felt fine if anything it was quite pleasant. And when I got out I was absolutely wide awake and notably did not need to chain four coffees before 8am in order to function. So in this sense it was 100% effective.

I only did about 30 seconds the first day, and have gradually built it up over the first week. That’s the method advocated by Wim Hof, aka The Iceman, the undisputed king of tolerating extreme cold. He promotes a 20 day cold shower challenge if it’s something you feel like trying.